“When you wake up… I’ll be a story in your head. But that’s okay. We’re all stories, in the end… just make it a good one, eh? Because it was. It was the best.”

I’ve just finished watching Jessica Jones. Let me tell you about The Doctor.

Jessica Jones is Marvel’s second foray into the Netflix drama.  Those keeping up will remember how amazing Daredevil was last year.  Jessica Jones takes place in the same Hell’s Kitchen and also intertwines into the Marvel Cinematic Universe.  Both shows of course reference the “big green guy” WHOEVER THAT MIGHT BE LOL.  But for serious.

Jones is a private eye, leveraging her super powers to make a few bucks.  She’s tried the super hero gig but she’s never been great with people.  She smokes, she drinks, she has a heart, but she has a past.  Well, she doesn’t smoke in the show.  I suppose you’re not supposed to show a hero smoking, although she is technically an anti-hero. 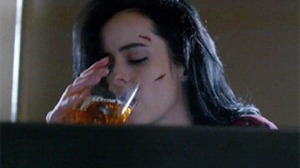 The show starts with the B from APT 23 attempting to get her life back together.  From what is an unraveling mystery that leads to a history with the series villain, Kilgrave.  Folks will recognize Kilgrave as David Tennant.  He possess a terrifying super power, the ability to control people with his mind.  Specifically, people will do whatever he says.  Literally.   Jessica Jones is a story about a man who finds an extraordinary woman and compels her to do what he wants, all in the name of love.

Which got me thinking.

Folks will recognize Kilgrave as The Doctor, a man who travels through space and time with a companion by his side.  Until he no longer does.  “Some left me. Some got left behind. And some… not many, but… some died. ” What if the story of the Doctor is told from his perspective, where the companions can’t wait to travel with him and he even has to turn some down.  The Doctor travels and puts his companions in harms way for the amusement and excitement.  But what about Jessica Jones?  This is the story about the companion who got away.

Jessica was a young girl when she learned she had a gift.  She had gained the ability to have super strength, although she was not sure how. While Jessica didn’t have a strong calling to be a hero, she always used her gift to help those in need.  When she got older, she moved to the city and became a private eye.   One day, she chanced upon a man being mugged in the street.  She fought off the would be killers and saved the man’s life.  Watching from a few yards away was a man in a suit. 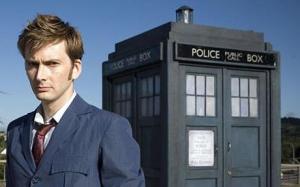 “lady, there is a Police Box literally right behind me…”

“Where do you wanna go, aye? What do you wanna see?”  It was hard for anyone to not be moved by his charismatic smile.  The Doctor was so excited about the adventures that could be had.  Maybe that’s why it was so easy for Jessica to follow him.  She had spent her whole life not knowing where she belonged, and now here was a man…seemingly more so…whisking her away on a fantastic journey.   Anywhere they wanted to go, they went.  The finest foods and clothes were all at her fingertips.  They ran and they ran.  Faster and further than anyone.  Days started to blur into nights, nights blurred into weeks.

Jessica started to lose herself. Maybe it was freeing at first.  The loss of control and freedom from the inescapable prison of they daily grind came as relief.  But soon Jessica saw the walls.  She was bound to the Doctor. She wasn’t truly free.  She was his prisoner and his play thing.

“Don’t challenge me, Harriet Jones! ‘Cos I’m a completely new man! I could bring down your government with a single word!”

One night, The Doctor had Jessica claw a box out of the dirt.  Only one person had known where the box was buried, and Jessica had captured her.  She was compelled to please the Doctor.  Once he had his box, the Doctor spoke.  “Get rid of her.”   Jessica took the woman to the street and pushed her in front of a bus.

Jessica knew she had gone too far.  She locked eyes with the woman and watched in horror as the woman was crushed by the bus.  Jessica began to stagger off, in disbelief that she could do something so horrible.  The Doctor called for Jessica to come back to him.  Again he called.  But her grief was too much.  She looked back, and she walked away.  Somehow she was finally free.  This is the story of Jessica Jones and the spark of her revenge. 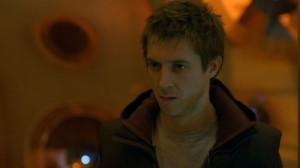 Fanfic aside, Jessica Jones is a great series in the Marvel Universe that explores aspects more intricate than “bashing villains”.  Kilgrave is a complex character and some times you feel for him while you want Jessica to reign herself in.  Casting is well done and you get great story telling between all the characters. I was never like “whoa damn!” like I was watching Daredevil, but I enjoyed the show.  It’s a complex show, so you won’t get the full story in the pilot episode, but pacing is even enough that watching the first 2 episodes should be enough to form an opinion.  I recommend it. Get your ass on the couch and crank it up.