Full Frontal with Samantha Bee, the latest “spin off” show from Jon Stewart’s Daily Show has recently debuted.  So far its amazing.  Lets take a look at the legacy of comic journalism.

The Daily Show, From Jon to Trevor 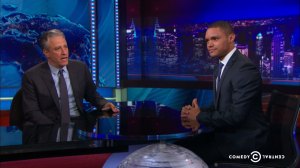 Stewart was an icon.  His work on faux journalism started after taking the reigns from Craig Kilborn.  Initially the daily show was about cracking jokes related to pop culture.  That soon evolved into more serious topics.  In his prime Stewart inspired and informed a viewership who had given up on the other mass media giants. According to Politifact: ” A 2014 Pew Research Center poll found 12 percent of people regularly got their campaign news from The Daily Show. That’s on par with The New York Times and USA Today and higher than Politico or Rush Limbaugh’s radio show.”

Since handing over the desk to Trevor Noah, the political fervor has dialed back.  Noah is still searching for his footing, which is to be expected.  His jokes are fairly good ones, but his interviews have been lacking.   One does not simply Jon Stewart on the first day.

The Colbert Report to The Late Show 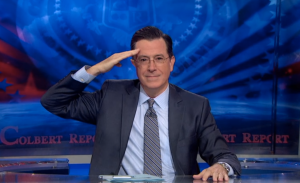 Over too soon, The Colbert report was The Daily Show’s first spin off.  The great Steven Colbert took Stewart’s audience and increased its activism.  Colbert constantly challenged America and America responded.  “Colbert has made vital observations about the American political system, particularly about the sordid role that money plays within it.” According to the New Yorker.

Steven Colbert is now the face of The Late Show, following the departure of David Letterman.  His political fervor has also been dialed back as he’s accepted this gentleman’s talk show.  Understandably, The Late Show demands less than The Colbert Report would, in terms of a perpetual journalist fight, both physically and emotionally.  The new position is a testament to the legacy of the Colbert Report and a fitting retirement home. 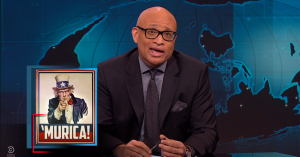 keep it a hunnid

With the Colbert Reports’ time slot available, Larry Wilmore stepped in with his spin off, The Nightly Show.  Wilmore brought all the standards of a late night talk show with the legacy of The Daily Show, but has stumbled every step of the way.  The show’s inability to capture that same magic stems from its cast, not its format which changes often. Shows are often limited to a singular topic and are beat to death.  Guests are invited, but often ignored, as the Nightly Show panel always consists of three members of the cast who tell jokes instead of promoting discussion.  Still, the potential exists and The Nightly Show is only now in year two. 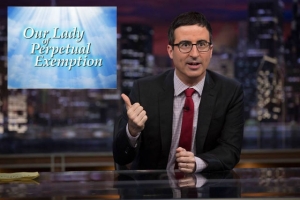 give us your seed

John Oliver took his spin off show in a different direction.  His show last week tonight airs on HBO, a channel with almost zero rules.  As such, Oliver is allowed to maintain the fury of a Stewart or Colbert and then take it up a notch.  Last Week Tonight goes farther into investigative journalism and satirical pranks than any of its companions. Investigations into prison sentences, voter fraud, and racist mascots are just a few of the topics Oliver presents.  But then he takes them a step further.  While investigating IRS abuse by televangelists, Oliver started his own church and raised money following the basic guidelines set by the government.  This is exactly the type of investigative show you want to watch and HBO free reign policy is the perfect platform.

“does being a woman mean automatically getting dumb questions?” “Yes.”

This is the show you’ve been waiting for.  A basic cable show that takes no shit.  Full Frontal is a risk for TBS, but something well worth it as Samantha Bee has already shown.  Ignoring the “shes a woman on tv wow amazing” questions because they’re stupid, her first episodes have already impressed more than anything Trevor Noah or Larry Wilmore have accomplished so far.  What those shows have been lacking is what Samantha Bee brings in full force.  In her premier episode, she completely roasts Kansas state senator Mitch Holmes.  Holding elected officials accountable for their bullshit in a comedic way is what Stewart’s legacy is built upon, and Bee captures it beautifully.  While the show is presented in what looks like a Tosh.0 format, Samantha Bee is actually funny and has actual funny jokes.  Full Frontal will also proceed without guests, which should allow more time for in depth reporting.  We’re only a few episodes in so far and you had better start watching it.