I found myself excited to get my Wii U in Christmas of 2013. For various reasons, but I was very interested in downloading Earthbound. Having really hit my stride during the Super Nintendo era, I was pleased that an old friend was getting a new lease on life.

Ending what could only be described as “The Worst Year of My Life” (TM), I found myself looking to get away from what had become a daily trudge. Financial troubles coupled with the loss of my mother found me yearning for the good ol’ days. I had been in the market for a car, and consistently found myself looking for an old Honda Prelude – like the one I had in high school. I even started this blog expressing my opinion on the video game industry.

No surprise then, the first Wii U game I purchase is Earthbound.

My history with this particular title is a short one. In my younger days, a friend had talked on and on about how great it was. I went to his house to give it a whirl, and was instantly confused. My friend, it seemed, had only heard how great it was from others and had never actually tried it himself.

I should preface, the game itself wasn’t hard. But the premise… Earthbound isn’t a fantasy game. Not in the sense of Dungeons and Dragons or Final Fantasy. It’s an every day adventure that just happens to have monsters in it. And even then you’re a few hours into the game before you actually see these monsters.

In my youth, I wasn’t able to understand the concept of solving any problems in this universe. I understood Zelda. I understood Mario. You’ve got a goal and enemies are in your way. Do what it takes. Even without reading the manual, you get Bowser is bad. You understand Gannon is standing in the way of your credit sequence.

This every day adventure includes antagonists that are not so clear. Can you trust a real estate agent? A thief? A conman who admittedly double crosses his employer? Surely and historically a creator wouldn’t allow a seemingly contradictory entity to exist. And to what end? Who wins at something like cancer? Not the brave, not the strong. Not the wealthy, and certainly not those who have the most life left.

My own mother gave her life in the service of our unrelenting fight against cancer. It seems a shame to say her greatest adventure was her last, although, it is in my eyes the most moving. Her Tennant-esque finale perforated by the Doctor’s wisdom “Sometimes, even we Doctor’s to realize when we’re doing more harm than good.” will play in my mind forever.

“I understand these things.” I read the text on the screen. Ness’ mother sends him off to bed, glad to have him home. A younger player might read this as a quick free ‘pick me up’. I would have, 18 years old and driving home to my parent’s house from college. “Have some pizza!” How accurate.

Earthbound adds several interesting elements to its atmosphere. Its nonchalant attitude of its citizens, the absurd yet familiar enemies, and its dependency on modern conveniences all stick out against its ridiculous 16 bit jazz soundtrack. This game seems to be powered by 100% charm.

Family plays an extraordinary part in this game as well. Take for instance, your dad. Here is a man hard at work, harder than most dads. Twenty Four hours a day and seven days a week, your dad works to provide for your family and your adventure. You call him to save your game, and he puts what money he can into your bank account. He reminds you that you work too hard. His ‘life shouldn’t be about work’ mantra seems funny to your ears. Does he not want me to play this game? Isn’t this what they want? A father always wants better for his children.

Earthbound actually hinders your ability to fight by causing homesickness. Visiting home or calling mom is the best way to cure yourself. “Hello!” she says, excited that you called. “ I know things are tough, but thanks for calling – now I have to finish ironing!” It seems a lot of trouble just to be cut off the phone by your mother, and its only text but… is that sadness? She feels excitement when she hears from her son, and yet the call is a reminder that he is not on his way home. Is this sinking notion the reason she quickly gets off the phone? “A mother understands these things.”

I find myself dealing with various bureaucracies and regulatory agencies that want to make sure I’m doing the right thing. My adventure is one on the path of marriage to a woman I’ve fallen very much in love with. One day, we’ll have children of our own. Her own mother lost her fight with cancer just days ago. Still, we press on.

The end of any game is always meeting the creator, a thank you, and a blank screen. But the game was never about the final boss. Gannon and Bowser were never standing in your way. We are Earthbound. The adventure is here and now. How about giving it another shot? 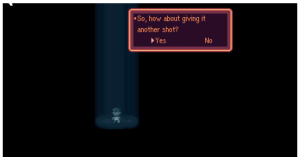