I make fun of vegans a lot. Why? Because they deserve it, silly. And now I know just to what extent.

Around the time of my being so infuriated about the “vegan ganache” (Sorry, my links are always screwed up, so here: https://fetchwillneverhappen.com/2015/05/20/kill-your-food-blogs-a-vegan-ganache-that-is-vegan-and-a-ganache/), my friend challenged me to be vegan for a week. Idiot that I am, I accepted, maybe in part because I don’t enjoy having opinions of any matter without having done extensive research; from a seesaw ridden by shame and pride I’ll declare just how much of Tyler Perry’s body of work I’ve sat through, which is like Russian roulette for writers with schizy blood pressure. “Why do you hate Tyler Perry, Jarred?” “BECAUSE I RIGHTFULLY CAN AT THIS POINT.” I also thought that, after going vegan for a week, I could twist it into yet another article of my self-aggrandizing style of gonzo journalism.

It’s with this same “get the story!” fervor that I was once forbidden by my friends to live with Atlanta’s homeless for a month. WHERE THE HELL WERE Y’ALL DURING THIS VEGAN THING?!

“Oh yeah, you think I can’t go vegan for a week? Watch me! WATCH ME!” Oh Jarred, how you’d regret those stupid, stubborn words.

My energy reserves dumped out onto the floor and my belly was so bloated I felt like I’d never be able to socially screen farts again and they’d make their own rules. Every conscious moment was spent frantically planning meals. I snapped and cussed out a friend who argued it was okay to eat certain fried foods despite meat and seafood (and buttermilk) having been in the same oil. All this was the first day. And it only got worse.

I tried to salvage the time by utilizing my cook’s brain—“What if I made this vinegar-based slaw! Or tofu chili! Or pasta salad with a type of pesto! Or this! Or this!” Almost all projects were failures, not because they were bad ideas (because come on, this is me), but by absent-minded mistakes or missteps, such as grabbing the cilantro instead of Italian parsley. Who does that?? Not I, not before I became a vegan and my nutrient-denied brain had my senses misfiring.

I felt like I was missing out on the potential greatness of every day, like when someone tried to enthusiastically shove cake (eggs) in my mouth. “Want some cake?!” I said I couldn’t and we sobbed together. A bag of gummi bears (gelatin) shouted my name in the middle of every night. I got excited for guacamole and salsa at a restaurant, only to learn that I couldn’t have the chips (shared oil with meat and fish). I became more irritable than ever; after finding both of the nearest liquor stores mysteriously closed early one night, I literally put my truck in park for a minute and screamed like an abusive teenage redneck who had just been hung up on by his girlfriend. And why? Because my frustration had me needing to get blackout drunk all week to cope with the emotional stress of the diet, and in hopes that I would drink until I could simply go to bed without eating. The effects of the diet were surprisingly so extreme—and so sudden—and its limitations so strict that I wanted to cry on many occasions. Almost every occasion.

My diet was all I talked about for the full seven days, yet I was agitated, as many vegans are, by all the questions. “You can’t have meat? Dairy? Eggs? Cheese?!—“ “LOOK, FOR GOD’S SAKE, NO I CAN’T HAVE CHEESE.” People would hear. People would stare. People would hear and stare and then come ask the same questions. Oh no, I thought, I’m one of them. The vegan in the room. I understand now. I couldn’t wait for the challenge to be over, as I was becoming sickened by my own Lena “I piss angrily on gender norms while standing up” Dunham-esque self-righteousness. Dear God, man, I need eggs! Chicken! Both, in any order! Do I have sympathy for vegans now? No, they chose the life. 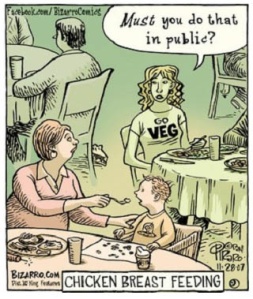 But I did learn a lot. I learned that PBR was already vegan-friendly, and thank God, since it was already my brand of choice by my own patriotic volition. Guinness, however, uses isinglass (from swim bladders of fish) in its fining process. I learned that Boca veggie burgers have egg in them, but do make a vegan variety that is total crap.

I was amused to discover that Animal Crackers are almost vegan-friendly, except that they contain palm oil, the production of which is the biggest threat to wild orangutans, something I had already known when I sponsored two orangs named Lomon and Kesi long ago. A “vegan” who uses or consumes palm oil products is a gigantic hypocrite and we all have the right—no, the obligation—to push him down and laugh at him. 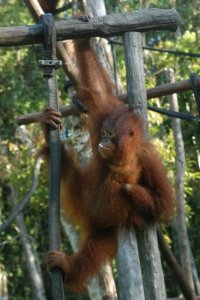 Trying as it was, I survived the 7-day challenge, but I didn’t feel like a winner. I felt awful, more miserable than ever. Who wants this?, I thought. Who wants this lethargy, this body-withering self-denial, this loose stool of varied colors? I certainly didn’t. I wanted my poops to go back to their normalcies—the “now” and the “right now.” Upon waking the following afternoon, I ripped open the bag of gummi bears and devoured them. I raced to fire up the grill, but there was a Georgia monsoon outside. You can’t stop me! I drove to my local-est of local bars. Attack this vegan diet on all fronts, Jarred. “I’ll have a Caesar salad (eggs, cheese, anchovies)… Potato skins (cheese, bacon, sour cream)… And ten hot wings (meat, butter, dairy (Ranch dipping sauce)).” All fronts, I said. “And I’d like a Guinness.” Yes. I finished every last bite and knew I wasn’t done. An hour later I had a #8 from Taco Bell.

And right then, I had never felt better. Going vegan—for just a week—is without question the dumbest thing I’ve ever done. Maybe it works for some of you out there, probably some of you readers who now won’t return. But I’m never trying it again.

But I can’t leave you without a recipe, right? A deliciously non-vegan recipe, of course. The day after I reclaimed my body, mind, and diet, I prepared what I would afterward describe as “The best eggs I’ve ever had in my life.” Maybe they were, or perhaps it was just because I had missed them so… But either way, the statement was true to me then, and so will forever be.

THE BEST EGGS I’VE EVER HAD IN MY LIFE:

Assemble the mise en place: A greased non-stick pan; 3 large eggs; 1 TSP your favorite hot sauce (I like Tapatío, because it’s delicious and the man on the bottle looks like Jared Leto disguised as a Mexican); somewhere between a pinch and 1/8 TSP each of salt and pepper; 2 TBL pancetta, ohhh yeah; 2 TBL aged or smoked Gouda cheese, grated. Ready? Let’s go!

Crack the eggs into the pan on high heat. Add your hot sauce, salt, and pepper. Wait for it…Wait… Now! Start to scramble. Throw in the cheese and pancetta and keep scrambling to your heart’s desire! Put it on a nice, white plate, snap a photo, share with the internet. You’re welcome, and thank you. 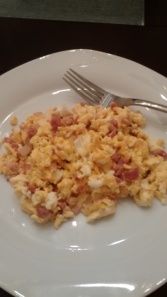 I guess I have to get a DSLR to be a “real” food blogger.