Grand Theft Auto is a game about stealing cars and running from the cops.  And that seems like a lifetime ago.  Looking back, GTA was simple, straight forward, and a little hard to control.  Years later, GTAV is a whole new world.

In 2001, Rockstar Games and DMA Design brought us Grand Theft Auto III, a game that changed the industry forever.  It was ground breaking, with its incredibly expansive open world sandbox game play.  GTA3 was a complete franchise overhaul – no longer was stealing cars your objective.  You could do anything you wanted,  including some acts that would cause the game to come under fire, such as murdering prostitutes.  “Experts” agreed that GTA3 was the sole reason for crime, violence against women, and the apocalypse.

So much programming and design goes into a regular game.  Grand Theft Auto 3 pushed  the envelope by creating a living world.  Cars drove around the city and reacted to traffic.  Pedestrians roamed the city, occupied with their lives.  These actions were limited, with the action often constrained to a limited distance.

Twelve years later, Gran Theft Auto V  has advanced beyond what anyone playing the original would have thought.  Costing a record breaking $265 Million dollars, GTAV pushed the boundaries in every way for sandbox simulation.  Grand Theft Auto’s leap from 2D to 3D in 2001 was the tip of the iceberg.  Now the team have conquered the sky and the sea.

The level of detail in GTAV is absolutely insane.  In any other game, you might find a field with a few plants scattered around.  In GTAV, you are in a living breathing ecosystem.  The animal kingdom of GTA is alive and well.  More than just a back drop, these animals are active and intelligent enough to leave actual lives. 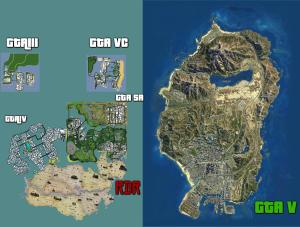 a size comparison of GTA maps

GTAV is a game that is heavily modded, allowing new and interesting ways to experience the environment.  One team,  8 Bit Bastard, decided to put free cameras to use and document the lives of these animals.  The two-part series entitled Into the Deep and Onto the Land follows these animals and fish in their natural habitat and documents their daily lives.  Sometimes its funny (deer) and sometimes its really surprising.  All of the extra work involved, all of the little details really make Grand Theft Auto V stand out as the leviathan game of this generation.

Watch Into the Deep here

and Onto the Land here